In September 2016, Cole Bank Park Local Nature Reserve in Chelmsley Wood benefitted from a significant habitat improvement project. The project included de-silting ponds and re-profiling a 250 metre section of bank on the River Cole to enable an increase in the natural river processes, reconnect the river to its floodplain, slow its flow and reduce flood risk downstream. 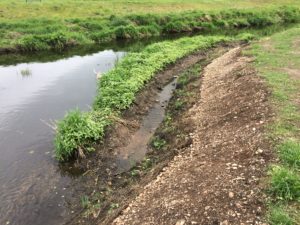 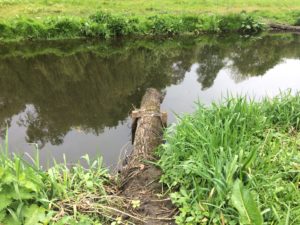 In February 2019 Phase 2 of the project was completed. This involved habitat enhancements to the River Cole adjacent to Meriden Park. A 300 metre section of the river at the confluence with the Kingshurst Brook was the focus of a range of different physical interventions.

Historically this section of river has been heavily modified (canalised) which has resulted in a uniform channel with steep banks and straight sides. There is an absence of natural river processes, including erosion and deposition. Consequently this stretch of water has a reduced ability to accommodate large populations of wildlife, known as the environment’s ‘carrying capacity’.

The team worked closely with the Environment Agency and Tame Valley Wetlands Partnership to design a range of physical interventions to reverse the decline in biodiversity suffered by the river over recent generations. These included:

The collaborative project was funded by the Environment Agency and delivered by the Tame Valley Wetlands Partnership with support from the team, helping to deliver the key Council priority of working in partnership to enable cleaner, greener, safer and healthier neighbourhoods.