In Spring 2020 Solihull Council completed a three-year programme of habitat and nature improvements in publicly accessible green spaces in the urban areas of Solihull.

Part funded by the European Regional Development Fund (ERDF), this series of grassland, wetland, woodland and tree planting improvements have increased and strengthened the capacity of the natural environment across the region.

The Environment Agency and Warwickshire Wildlife Trust were our strategic partners on the delivery of the project.

With the aim of helping to address the national reduction in species-rich grassland, five sites totalling some 30 hectares of public open space were improved. The first of these was at Dickens Heath Country Park in 2017, and work followed in 2018 at Beechcroft Open Space, Cole Bank Park, Colebrook Recreation Ground and Elmdon Nature Park. Green hay was imported from meadows managed by Warwickshire Wildlife Trust to improve the biological and landscape value of our park grasslands. 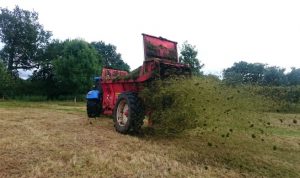 To diversify the watercourse of Low Brook, four pieces of large woody debris were introduced to the brook alongside Alcott Wood. These add variation to the structure and flow of the brook and provide cover and perches for insects, birds, amphibians and mammals. 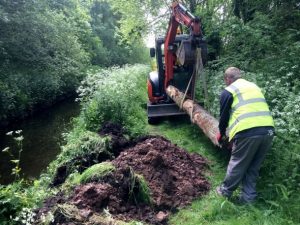 This reed bed was created alongside a connection into the River Cole, which was identified as being of poor quality. A basin was hollowed out of the gravelly soil and planted with reeds and other wetland plants.  The channel has been deflected into the new water body so that natural filtration will help to remove pollutants before it connects into the river. 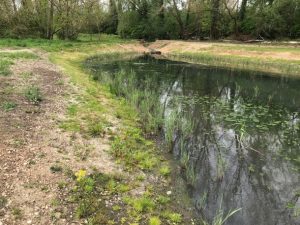 In the 1970s a weir was built alongside the footbridge over Kingshurst Brook to form a lake in Meriden Park. However the weir became an obstacle to the movement of aquatic life, and the lake gradually collected sediment, which left poor water quality and an ongoing requirement to remove the silt.

In 2019 works were carried out to make the park a healthier habitat for wildlife and a better amenity for local people by removing the weir and allowing the brook to flow naturally through the park. With the water level dropped, parts of the former lake area have been formed into new habitat for wildlife including wet woodland, reed beds, a wet meadow, and ponds. Along the brook there are temporary plastic piling sheets to reinforce and establish a new bank. These sheets will be removed in 2020 and the new scheme will emerge as the planting establishes.

The weir beneath the footbridge has been removed so that the brook is naturalised to flow freely through the park. Along parts of these banks there are temporary plastic piling sheets to reinforce and establish the new bank. These will also be removed in 2020. 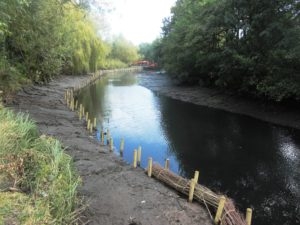 Hatchford Brook in its section through Olton Jubilee Park was heavily engineered in the 1980s, resulting in a uniform channel with steep banks and straight sides. The aim of this project was to re-naturalise the brook to improve the morphology and water quality of the brook, and increase biodiversity.

Over 50 tonnes of concrete were broken out and removed, including slabs from the stream bed and sides, and four steps which obstructed the passage of wildlife. The brook has now been restored to a natural stream profile with shallow banks and meanders, and planted with wildflowers and grasses. Sections of the banks have been re-profiled with a shallow gradient on the outside bank and a steeper profile on the inside of the meander allowing natural erosion and deposition processes to operate.

Natural meanders being formed in 2019

Important woodland management took place in 12 of the borough’s woodlands during 2018 and 2019, as part of this project, in order to protect the long term future of the woods and their trees, plants and animals. Some large machinery was brought in to selectively remove trees which were unhealthy or preventing other trees from thriving. This improved the woods so that they now contain trees of a variety of species, ages and heights, giving opportunity for varied wildlife habitat. Removing some trees also allows light to reach the woodland floor, which encourages ground flora and in turn supports pollinating insects such as bees and butterflies.

During the winter of 2020-21 we are carrying out similar maintenance works in the borough at the following woodlands:

The works will mostly involve thinning the tree canopy and removing overgrown bramble areas. All are part-funded by the European Regional Development Fund. 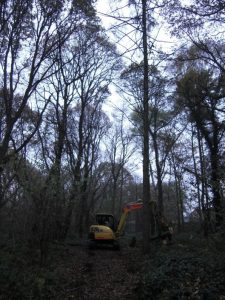 Find out more about why woodlands need to be managed here.

We included tree planting within Elmdon Ward in 2019, with the planting design developed in consultation with the Friends of Damson Lane Park and Elmdon Park Support Group. Trees, hedgerows and shrubs were planted in Damson Lane Park, Elmdon Park, Elmdon Nature Park, the small play park adjacent to Elmdon Coppice, and in open space on Rowood Drive.

The trees and shrubs were chosen for their value for wildlife and to increase biodiversity, including trees such as oak, field maple, lime, birch and rowan. 450 trees were planted in Elmdon Ward along with 690m of hedgerow and a fifth of a hectare of thicket, which includes hazel, hawthorn, dogwood, holly and guelder rose, to help establish green corridors for the benefit of birds and other wildlife. 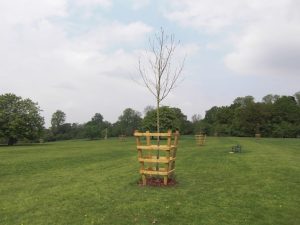 To see summaries of the individual sites and their wildlife click on the links below:

The project received over £900K of funding from the ERDF as part of the European Structural and Investment Funds Growth Programme 2014-2020. The Department for Communities and Local Government is the Managing Authority for ERDF. Established by the European Union, ERDF funds help local areas stimulate their economic development by investing in projects which will support innovation, businesses, create jobs and local community regenerations.

More information on the project is available in this document produced for entry into the Landscape Institute Awards 2020.