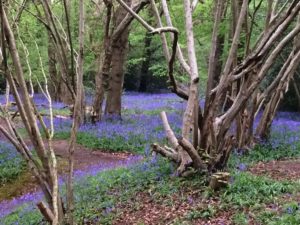 In 2017 Solihull MBC commissioned the production of Forestry Commission approved native woodland management plans for these woodlands. These plans identified a range of issues including:

The management work undertaken this winter has sought to address the above issues and implement the prescriptions detailed within the Forestry Commission Management Plans.

Healthy woodlands contain a range of different tree and shrub species of differing ages and heights. Selective thinning creates greater diversity of both structure and species within the woodlands. Thinning creates gaps in the canopy which in turn creates the necessary space to enable certain trees to grow to maturity. It also opens space for the next generation of trees to germinate and begin their life cycle. Opening up gaps in the canopy allows increased levels of light to reach the woodland floor which encourages a greater diversity of woodland flora. The thinning of dominant holly in particular allows native plants including bluebells, wood anemone, woodruff, red campion and wood-sorrel to thrive.

Of these woodlands, eight are classified as mature broad-leaved woodlands that support an established, if somewhat diminished native woodland flora. Now that the selective thinning has been completed it is anticipated that these much-loved vernal flowers will once again be able to spread across the woodlands. Lea Wood differs from the other sites as it is a relatively new plantation woodland, a little over 30 years old. Consequently it does not have any of the native wildflower species that are associated with older woodlands. In an effort to rectify this a team of volunteers from the Solihull Tree Wardens and Solihull Conservation Volunteers planted 2300 wildflower plug plants during April 2019, including bluebells, greater stitchwort, primrose and wood sage.

Within some of the woodlands, specific tree species have been targeted for removal. At Bills Wood LNR a stand of grey poplar have been felled and removed. These non-native trees were planted approximately 70 years ago, probably as a timber crop before the woodland was owned and manged by SMBC. The grey poplar is an invasive species that has been spreading from one corner of the woodland, out-competing native species and causing a gradual decline in biodiversity. Now that this group of trees has been removed the area will be replanted in autumn 2019 with native broad-leaved species characteristic of the Arden Warwickshire landscape – e.g. oak, birch, rowan and lime. Other invasive species that have been targeted for removal include cherry laurel, snowberry, rhododendron and cotoneaster. 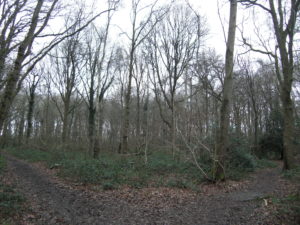 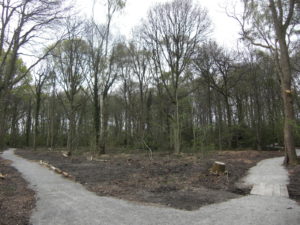 Pic: Bills Wood before (left) and after works (right)

In order to safeguard wildlife, the management work was undertaken outside of the bird nesting season and a European protected species assessment and mitigation plan was produced and implemented for all of the sites.

Approximately 10% of the thinned timber was stacked into log piles and retained on site as deadwood habitat. Both standing and fallen deadwood are critical components of a healthy woodland ecology, providing a fantastic array of ‘microhabitats’. There is an enormous range of saproxylic (deadwood-dependent) organisms including fungi, lichens, invertebrates, mosses and birds, many of them having very specific requirements, and some specialising exclusively on one particular microhabitat. A remarkable 40% of woodland wildlife is dependent on this aspect of the woodland ecosystem.

Now that the thinning and extraction is all complete, the focus is on reinstatement and infrastructure improvements. Footpaths and gates are being upgraded with enhanced interpretation and signage planned for later in the year.

It’s not just trees that make woodland: a healthy woodland habitat comprises a diverse range of trees, shrubs, herbaceous plants and bryophytes (mosses and liverworts) that occupy different ‘niches’. This programme of woodland management will enhance the ecological condition of the woods, which will ensure they are more resilient to negative factors including pest,disease and climate change – thus ensuring their longevity for future generations.